Reading is a difficult process. The brain must be doing several things at once in order to make sense out of the written word. Many things can go wrong when a person is learning to read. Those who struggle with reading will ultimately directly or indirectly struggle with life.

The Pocket Learner is a particularly useful intervention learning tool for word building, sentence construction, guided or independent learning.  It is therefore well positioned to serve as the ideal platform for developing reading skill.

It is very easy to measure progress using the Pocket Learner and so be able to ascertain distance travelled. When a child who previously used only pictures to communicate or who had to point at what they wanted is then able to look at a written word and is able to read or sign it, for example: the word “Milk” or “Toilet” it is both a joyous and a powerful moment and can be a serious game changer in the lives of all stakeholders connected to that child. 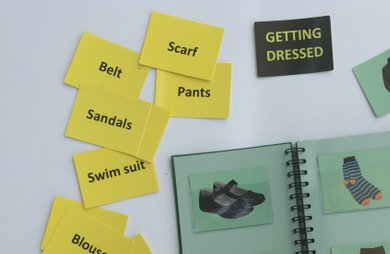 Britain has up to eight million adults who are functionally illiterate. It is estimated that poor reading 'could cost the UK £32bn in growth by 2025’. Research suggesting that by 2025, 1.5 million British children will reach the age of 11 still unable to read  well has has prompted the launch of a new campaign backed by a coalition of businesses, charities, bestselling authors and teaching professionals.

A specially commissioned report says England is one of the most unequal countries for children's reading levels, second in the EU only to Romania.

The gap between the strongest and weakest readers is equivalent to seven years of schooling. The report calls for a concerted effort from all corners of society. The report is claimed to be the "most comprehensive study of pre-school and primary school-aged children in a generation" and has found disadvantaged children are the worst affected, with 40% not reading well by the age of 11 – almost double the rate of their better off peers.

It is estimated that the prison population in the UK is some 85,000. More than three-quarters of them cannot read, write or count to the standard expected of an 11-year-old. In terms of  ex offenders studies have found that those who were functionally literate were more likely to find employment and the rate of reoffending drops from 90% to 10% if the person leaves prison and goes straight into the world of work. This would amount to substantial savings as every reoffender whose act lands back inside costs the taxpayer and average £250,000.

It is estimated that one in every ten people in the UK; ten to fifteen percent of the US population has dyslexia, yet only five out of every one hundred dyslexics are recognized and receive assistance.

Without the proper diagnosis and help, many dyslexics are part of the forty-four million adults with only the lowest level of literacy which limits their ability to find jobs and function independently within their communities.